This semester, I have the opportunity of working in the Genealogy department in the Wayne County Public Library. As one of their interns in the department, my task is to look at the Genealogy department’s Wiki page and pick a section/ topic that I am interested in. The topic that I chose was education, with the subtopic being the first educational system in the Wayne county area. My project specifically looks at the seven one-room schools in the Wooster township. I started my research by first looking at newspapers, books, and other primary sources on the history of these schools. While conducting this research, I have found images of the first schools built in the Wooster Township, as well as images of students who’ve previously attended these schools.  One interesting fact that I have uncovered in my research is that one of the first one-room school, the Red School House,  was taken down brick-by-brick and relocated to the Wayne County Historical Society in the early 1960s.  In addition, due to primary sources such as newspaper articles, I was able to get insight on how important these schools were, not only to the students who attended them, but also to the community as a whole. In the opinion of James R. Fetzer, one-room schools united the neighborhood to the common goal of making sure that their school district was the best when compared to others. 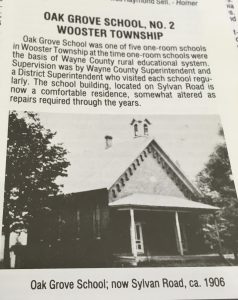 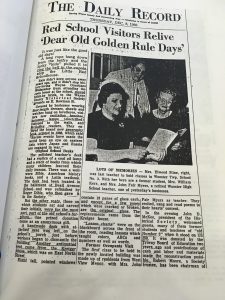