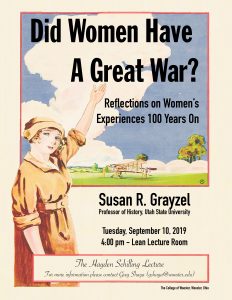 Please join us for the inaugural Hayden Schilling Lecture, a talk by the distinguished historian, Susan Grayzel, on women’s experience in the First World War. The event, open to the public, will take place on Tuesday, September 10 at 4:00 pm in the Lean Lecture Room.

Grayzel is Professor of History at Utah State University, having previously served as Director of the Sarah Isom Center for Women and Gender Studies at the University of Mississippi. She is the author of several award-winning works, including War: Gender, Motherhood, and Politics in Britain and France during the First World War (1999) and At Home and Under Fire: Air Raids & Culture in Britain from the Great War to the Blitz (2012). She will also be leading a faculty workshop and meeting with students.

More details below. We hope to see you there! Greg Shaya, History

The Hayden Schilling Lecture: “Did Women Have a Great War? Reflections on Women’s Experiences 100 Years On”

This talk explores some of the ways in which women experienced the First World War in order to ask if women’s “had a great war.” It examines not only what women across a range of backgrounds and circumstances did during the war—where, how, and why they participated and what they thought about this—but as important, what a focus on women might add to our understanding of the First World War itself.

Prof. Grayzel will be available to meet with students during the day on Tuesday, September 10. If you are interested in meeting with Prof. Grayzel – perhaps if you are working on topics of British history, gender history, war and gender – please contact Greg Shaya in the Department of History (gshaya@wooster.edu).

Susan R. Grayzel joined the faculty at Utah State University in 2017, teaching classes in modern European history, gender and women’s history, and the history of total war, having previously been Professor of History at the University of Mississippi, where she was also Director of the Sarah Isom Center for Women and Gender Studies. Her most recent publications include Gender and the Great War (Oxford University Press, 2017), co-edited with Tammy M. Proctor. Her previous books include Women’s Identities at War: Gender, Motherhood and Politics in Britain and France during the First World War (1999) and At Home and Under Fire: Air Raids & Culture in Britain from the Great War to the Blitz (2012). She is engaged in two current research projects; one tracing how the civilian gas mask came to embody efforts to address the consequences of chemical warfare in the British empire, c. 1915-45, and the second with Prof. Lucy Noakes (University of Essex) on gender, citizenship, and civil defense in twentieth-century Britain. She is spending the academic year 2019-20, first as a visiting fellow at All Souls College (Oxford) for Michaelmas term 2019 and then as UK Fulbright Distinguished Chair at the University of Leeds from mid-January to mid-July 2020.